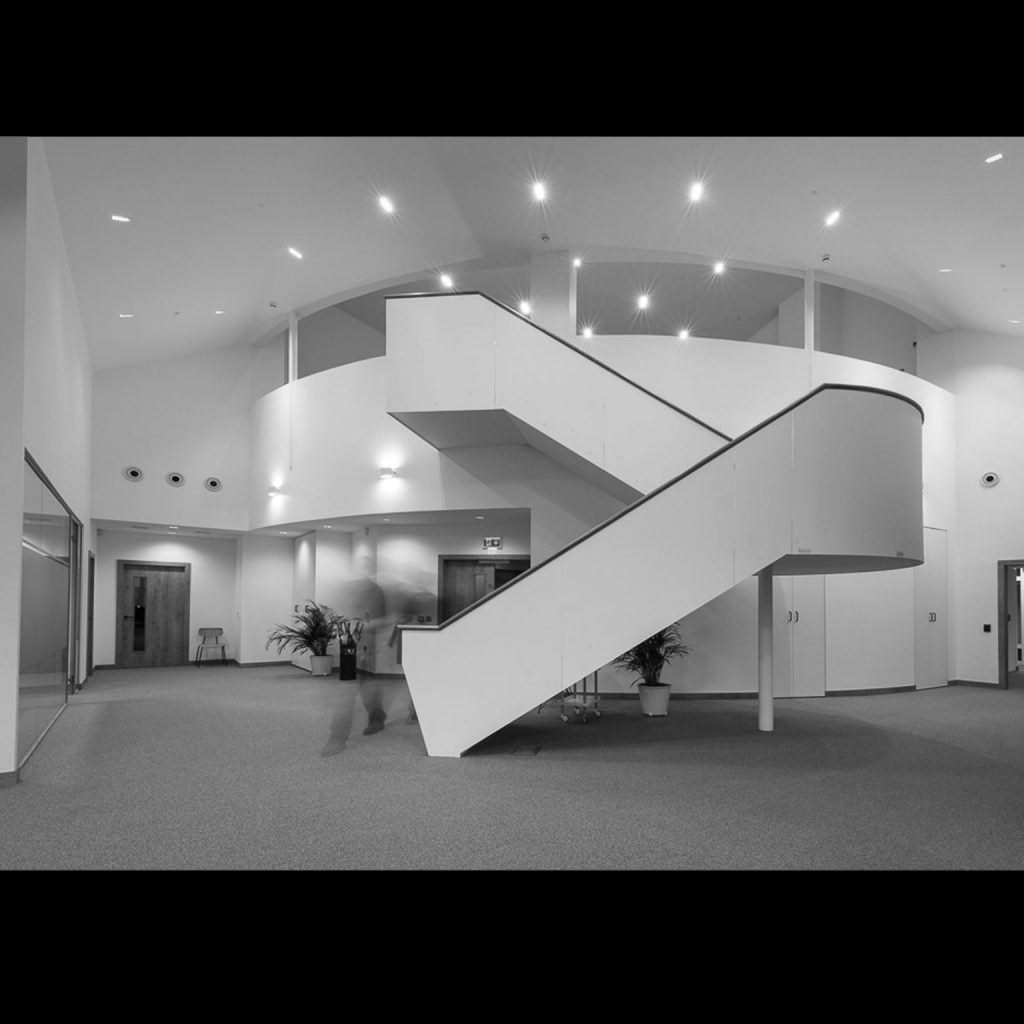 FinTrU was established in December 2013 by Darragh McCarthy, and along with Katrien Roppe (also from FinTrU)they had great expectations for designing a new office space that would reflect the level of success already gained and their ambitions for the future.

The new office space for FinTrU is located in an existing building in the historic area of the newly regenerated Gasworks, Belfast. The building was constructed almost 20 years ago and is located proudly at the entrance to the development. It is mirrored with a twin on the adjacent side of the road.

The inspiration for how the new space should be designed and the materials that should be used were influenced greatly by Katrien. The client insisted upon a design that would be simple and without any fuss. The idea of clean, simple and crisp lines was not optional and the colour had to be pure and white.

The clientís love of simplicity and the desire to reach perfection drove a project that was beyond the expected standard of any office fit-out. The challenge presented to Wheatcross, the main contractor, had to be delivered without compromise.

The building is entered at the centre of two wings which are rectilinear in space and portion. The floor plates are replicated over three stories and access is from a lift and staircase that connect the two wings.

When entering the second floor from the lift and staircase the space opens up to reveal a double height space that has a curved form in two directions. This is accentuated with the lazer lights that are traced into the ceiling like lights you would see on an airport runway. The level of light bounces off the white reflective surfaces, adding a further dimension to the space.

As with all well-conceived interior spaces, a fulcrum is expected to be something that ties the spaces and demands almost immediate attention. This was realized in the creation of a new staircase replacing an existing, clumsy and out of place staircase situated in the most awkward of positions. This is a pivotal element which demands to be noticed. The staircase was viewed as an object in its own right and is sculptured with metal that was constructed off-site and erected on site by Metal Craft. They created an object that was far beyond its practical purpose. The handrail to the staircase made from oak was designed and made by Big Picture Joinery. It softens yet compliments the white painted metal staircase.

Behind the stairs and a newly formed curved wall there is a little coffee dock and some storage spaces that have been carefully constructed by Big Picture Joinery to provide a functional yet invisible set of spaces.

A board room and meeting room are situated either side of an informal sitting area. These rooms have walls that rise to meet the cured ceiling. This reinforces the continuing sense of space. Both rooms have seamless glass partitions retaining the simple design approach. There is a curved window seat which provides another informal seating area.

The level of craftsmanship involved in creating a space which strives to be simple yet exhume beauty is something that all involved have strived to achieve.

The design sought, from conception, to realize a set of forms that at first jarred and in the completed form create spaces of beauty. These connect with our basic senses of sight and touch, however, design is more than the five basic senses; it involves a connection with space that is contained within the walls constructed.

The new steel staircase leads to an upper mezzanine area which is being utilized as a break out area. This space, in contrast to the pure white walls and ceilings, conceals a playful space with vibrant colours: namely the grass floor finish and leafy wall paper. The space is secluded by a half-height which doubles as a balcony edge. A pool table which is popular with the staff sits well with loose seating around the perimeter. This space has been designed as a place to relax, have fun and to connect with other members of staff.

On the second floor two new main offices are located either side of the entrance mezzanine area. These are the main places of activity within FinTrUís office. The design of the spaces and the layout of the desks have been thoughtfully created with each team member in mind.

A new canteen has been incorporated and this is at the very heart of the space. It meets with the ethos of the company:

it is more than just an eating space, it is seen as a place for staff to meet, chat and a place to relax. Katrienís eye for simple design is driven home with the use of timber which has been utilized to make bench seating. School style seats and tables are laid out to create little meeting hubs. The floor finish is a Retro-Grigio grey tile. The walls are painted white with retro wall tiles. Over the timber bench seating there are yellow lights. The colour play with yellow and blue adds a little vibrancy.

Concealed within the main office spaces are cloak areas designed by BPJ to provide hanging space and storage spaces that are incorporated as pieces of furniture. Indeed, all the storage areas including bins are cleverly crafted into the walls with seamless doors fitted to give uniformity and an identity with the overall space. No space was left unconsidered and every part has been utilized to have purpose.

The continuation of the office was extended into the toilet areas. These spaces required a full strip out to be replaced with new wall and floor tiles. The inspiration was driven by the retro tile which was used in the London underground. The white wall tiles were set once more against grey floor tiles. The creation of the toilet doors and vanity units were produced by BPJ. The same quality of material and overall fabrication was carried through in every aspect of the works, detail and thought.

The project was realised by a few and crafted by many. Its chief aim is to have a place where the staff are inspired and feel part of a company that is in its ascendancy.