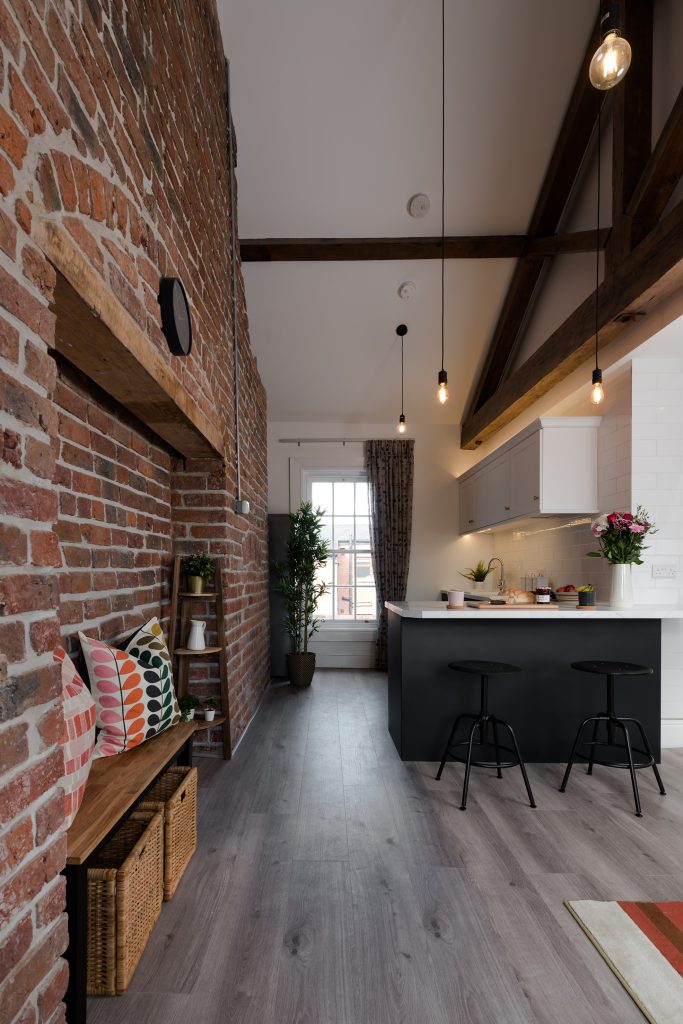 43-47 University Road lies within a conservation area in Belfast and the buildings are listed and protected. The five modest brick houses, once known as Cinnamon Buildings, were constructed in the 1840s. The buildings, of course, were once terrace-style houses that sat gracefully within the university neighbourhood (1840-1860) and represented the final construction of Georgian architecture in Belfast. Two have now been demolished to make way for a modern bank, but the uniqueness of the three survivors, with their distinctive Mansard roofs, can still be seen. The brickwork, with its lime render and sliding sash windows, presents a façade that is still impressive even in today’s building world of technology. In fact, there is an inherit beauty in the handmade Belfast brick, producing red and orange tones, which gives a deep richness to the old Belfast buildings.

The existing Mansard roof with Bangor Blue slates is still in place and repairs were carried out to ensure that the roof would last another century. The windows, of which many had to be replaced, are in sliding sash style, replicating the original windows.Internally, the buildings had suffered terribly with timber rot and decay throughout the decades, with minor botched attempts to repair damage. The buildings had also undergone various alterations and internal changes which had left their scars. David Graham, the structural engineer, worked majestically to ensure that the structure of the building was retained and improved.

The design proposal created a ground-floor café with an entrance from number 47and three apartments over first essence of the building as if unfolding its pages to reveal its soul. Unico, the contractor, engaged at every level and attention to detail was maintained throughout the build.The rear apartment overlooking Claremont Mews is very quirky and simple and in real contrast to its bigger brothers. This apartment, in its very nature, is subservient: it would have been a lower type of structure back in the 1800s, where the animals and cart may have been stored. This is now a large, single-bedroom apartment with a generous living / kitchen space, with quirky windows at low level keeping the original features. Although the books are all gone and the poetry nights a distant memory, there is still one final chapter left to unfold. That is, completion of the ground-floor café! When the café opens it will see the return of people, coffee, food and socializing. It is true there will be no more books, but this building still retains plenty of Belfast soul.

Previous
Next
Click here
Menu
We use cookies to ensure that we give you the best experience on our website. If you continue to use this site we will assume that you are happy with it.Ok